With the assault from Aftokrator continuing, Enedra breaks into the operators' room, and decides to do whatever he feels he wants. Meanwhile, Kizaki continues his fight against Hyuse and Viza, the latter having Organon, one of Aftokrator's national treasures. Kizaki fights, but gets cut in half by Viza.

The location and goals of Jin and Yūma, Chika and Izuho, Konami, Kizaki, Hyuse, & Viza, Izumi, Yoneya, and Midorikawa, Osamu and Karasuma, Tachikawa, and Enedra are given. Enedra breaks into the operators' room in the base. Hairein appears, and chides him for doing something that was not part of the mission. Enedra argues that they had to do whatever they could, no matter what. Mira suggests retreating Enedra, but Hairein declines.

The battle between Kizaki, Hyuse, and Viza rages on, with neither side backing down. Viza deduces that Kizaki's goal isn't so much to defeat them, as it is to protect the C-Rank agents. He explains the advantage of Kizaki in his home turf, and the wires that were put in place. He then uses Organon, a powerful Trigger, and a national treasure of Aftokrator. Replica, seeing this, is shocked, and wonders if something could be going on in Aftokrator.

The battle between the Neighbors and Kizaki finally ends when magnets get into Kizaki's arm, and he cuts it off. He then attempts to use Shield mode, but Viza's Trigger pierces through and bisects Kizaki. 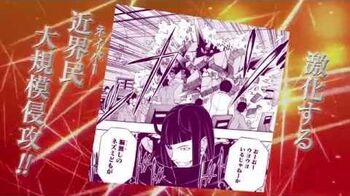