Hairein enters the invasion and uses his Trigger Alektor to dominate the battlefield. Though Osamu and the others try their best to stop him, Chika ends up being captured.

Impressed with Osamu and Chika's attack, Izumi introduces himself to him and vice-versa. Izumi explains that with Chika's ability, they have a possibility of winning, but their hope is quickly cut short when Chika senses birds, which is Hairein's Trigger, Alektor. Hairein manipulates the birds to shoot themselves at the C-Rank trainees, turning them to cubes upon contact. Hairein then sends a volley of fish at Yoneya and Midorikawa. They attempt to deflect it with their swords, but those too turn to cubes. Rabbits then attack the two, with Yoneya's leg me cut off and Midorikawa pinned to the ground. Hairein sends the fish at Midorikawa again. He attempts to use Shield, but it turns to a cube, so he uses Bail Out before he can be transmuted. Izumi, in vain, attempts to stop the birds. Hairein praises his Trion ability and uses lizards to cripple him.

Osamu and Chika flee from him, but Hairein tracks them down. They use another combination attack against Hairein, but again, he uses his fish to block the attacks. While he criticizes the Trion ability, he venerates the amount of Trion in the attack. He then uses another attack, successfully hitting Chika. 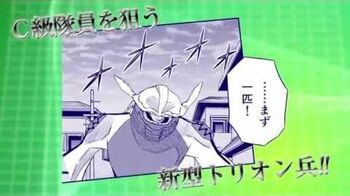