Fūjin (, Lit. Wind Blade?) is a Black Trigger created by Sōichi Mogami. It is compatible with a relatively high number of Border agents.[1] 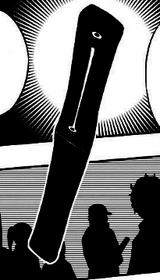 Fūjin's overall appearance when deactivated is a long, black sword handle with green circular designs on the bottom half of the handle and a green line in the middle of those designs. When activated, it releases a blade of green energy, similar in appearance to a Kogetsu, which hides part of the handle. The extra blades are undulating and semi-transparent and similar to tentacles. When these extra blades are attached to a surface, they become invisible until they are triggered, in which case they become thin glowing lines that extend into blades.

Some five years prior to Yūma going to Earth, Sōichi Mogami laid down his life in order to create this Black Trigger.[2] It has been in Yūichi Jin's possession for at least three years since.[3]

Fūjin is an offensive Trigger that comes in the form of a highly efficient sword that is lighter than Scorpion and both sharper and more durable than Kogetsu,[4] giving the user an edge in close quarters combat. However, according to Tachikawa, the blade itself is not much different from an Attacker Trigger.[5] Fūjin's real power lies in its ability to transmit its slashes through solid objects to strike wherever the user can see.[6] A remote attack is initiated when the user slashes at a surface (walls,[7] floors,[8] or ceilings[9]) causing a straight line of light to travel along that surface in the chosen direction. At the user's command, a blade will emerge from it, subsequently causing the attack to terminate. Being in an enclosed space with a Fūjin user may create hazards for the opponent, as the slashes can be transmitted to strike from multiple, unpredictable angles.[10]

The number of remote slashes the user can fire is indicated by wavy, ethereal ribbons of light that sprout from the base of the blade.[11] Each one corresponds to a slash; when there are none left, the user has to recharge them.[12] The reloading process could, however, give the opponent an opening to attack.[12] The trion capacity of the wielder determines how many such ribbons they can generate: Jin, who has enough trion to develop a Side Effect, creates 11,[12] whereas Miwa summoned 6 ribbons in his fight against Hyrein.[13] Someone like Chika Amatori would manifest 50 or 60.[14]

In terms of sheer firepower, Fūjin is not that impressive, as the focused Shields of Galopoula soldiers could block its remote slashes.[15] Its strongest points are its speed and range. The latter is enough to mark it as a Black Trigger.[16] The slashes will, in fact, keep traveling in a straight line until the user manifests the blades from them.[17] Should they not have a visual on the enemy, it is sufficient that an ally tells them when the target has been reached to strike them.[13] Another highlight of this Black Trigger is the unusually high number of individuals it is compatible with.[18]

According to Miwa, Fūjin is indeed powerful, but its attacks are too specialized and it lacks adaptability.[19] However, this downside does not apply when it is wielded by Jin, as his ability to see into the future allows him to use it in an otherwise impossible number of ways.[20]

Fūjin is compatible with a high number of Border agents. Originally there were about 20,[18] although currently, the number has dropped to only 12 known candidates.[1] Its most notable user is Yūichi Jin, who has been in its possession for the longest time, and whose top-notch skills as a swordsman and precognition abilities make him an ideal match. To ensure Yūma's enlistment, he handed it over to HQ. Sōya Kazama, the top candidate, refused it, and Jun Arashiyama and Ai Kitora were excluded due to their involvement in public relations.[1] Miwa borrowed it briefly during Aftokrator's attack, but refused to leave his Squad and returned it to HQ.[19] It was thus decided to make Fūjin available to all compatible users, with Jin offering to train them.[21]