Kōji Oki ( , Oki Kōji?) is a B-rank Sniper and a member of Ikoma Unit. 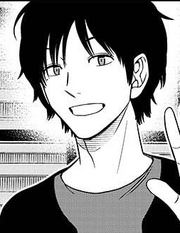 Oki is a light-skinned young man of average build. He has short, messy, wavy black hair parted at the center-front, and blue eyes. He has a mole below his right eye.

Oki's uniform is comprised of a vermillion, white-zipped jacket. A horizontal white line runs across the chest portion roughly at the height of his armpits, whereas on the back it bends into a flat V-shape pointing downwards,[7] with an ornamental button right above the tip.[8] On the right breast, the white line encircles Border's logo, above which is emblazoned the B-rank emblem. Everything above the white line is black in color, including the high collar, which Oki keeps open to reveal an undershirt with a V-neck;[9] the only exception are the vermillion plain button epaulets. The sleeves are also black until roughly halfway through the humerus, after which they turn vermillion, and disappear into Oki's thick gloves about an inch past the elbow. The gloves are black with a gray palm and a thin brown buckle that encircles them near the cuff.[7] The black portion of the sleeves and the collar bear a square motif that suggests padding. The uniform is completed by black pants with front and back pockets,[8] gray-brown boots that reach halfway up Oki's calves,[7] and a reddish-orange sun visor.

Oki is easygoing and confident. He has a tendency to act in a flirtatious manner with younger girls, complimenting them while saying that he would like them to be his sisters.[9][10] He denies his popularity with girls[1] and is very secretive about that aspect of his life.[11] Nonetheless, he contested Tōma's statement that he was slow to shoot at Chika in round six because she seemed to be going for a mutual hit, claiming that she was too cute for him to pull the trigger.[9] This and similar protests are widely considered part of a "good guy" façade,[12][9] and he is in fact willing to shoot,[13][14][15] although it is possible that he finds sniping younger girls more distasteful than any other target.[16]

Ikoma and Oki appear to be on friendly terms. The Sniper is amused by his captain's puzzling anecdotes and makes light-hearted remarks on them,[17][18] or, more precisely, on Ikoma's choice of subject[19] and storytelling habits.[20][21] Ikoma often comments on Oki's popularity with girls despite the latter's denial,[1] even using his good looks as an argument to get him to shoot Chika, to Oki's embarrassment. There might be a shade of envy to his teasing.[22] Ikoma believes his professed reluctance to snipe young girls to be no more than an act to support his "good guy" façade.[12] He addresses Oki by his surname, without honorifics,[23] while the Sniper uses his nickname followed by the honorific -san.[17]

Mizukami is not enthused by Ikoma and Oki's back and forth about the latter's popularity,[1] although he will exploit it to spur Oki into action during rank battles.[22] In fact, during a match Mizukami can often be heard egging the Sniper on.[22][24][16][25] He most commonly addresses him by his surname without appending a honorific.[13][16][25]

Oki appears to like teasing Hosoi, pointing out to his teammates that she seemed to resent Ikoma never calling her cute, as when she thinks to herself that Ikoma never called her cute, sparking a round of compliments that embarrassed her greatly. He addresses her by her nickname "Mario" without honorifics.[19]

Oki frequently dismisses Minamisawa's bursts of exuberance, which the Attacker does not appear to take to heart.[26] Oki addresses him by his first name, without adding honorifics.[27]

Tōma and Oki appear to know each other well, and are close enough for Tōma to mock Oki without the latter taking offense.[28] On one such occasion Oki attempted to convince him that his delay in firing back at Chika was due to sentimentality, although Tōma was not persuaded in the least.[9] They address each other by surname, with Oki appending the honorific -san.[28]

Ema and Oki might be on good terms with one another, since Oki addresses the younger Sniper by his first name, without honorifics. However, Ema was bothered by Oki's flirtatious behavior around Chika both because he was making her uncomfortable and out of jealousy, and told him to stop, which surprised Oki. Even on that occasion Ema addressed him respectfully, appending the honorific -senpai to his surname.[9]

Hiura and Oki are on good terms. After she heard him say that he has trouble sniping cute girls, Hiura asks him if he would be able to shoot at her, and she rejoices when he says that he would indeed be conflicted. She addresses him by his surname followed by the honorific -senpai, while he uses her surname and the suffix -chan.[29]

Oki praises Chika's diligence as a Sniper and resented being assigned to taking her out in round six.[12] He claims that he had trouble pulling the trigger at the deciding moment because he always wanted a sister like her, and because cute girls are difficult to shoot at. However, she was distressed by his flirting.[9] Oki addresses her by surname, to which he appends the diminutive suffix -chan.[28]