Karasuma goes into battle with Hairein with Yoneya, with 200 seconds until Bail Out. He recalls a conversation he had with Jin about the invasion. With Mira's help, he manages to land his fish on Karasuma, forcing him to Bail Out. He then appears in front of Osamu.

Karasuma activates his Trigger, and defeats the Rabbit in front of him, catching Hairein's attention. He asks Yoneya to watch the cubes that the C-Rank members were transmuted into. He then recalls a conversation he had with Jin, about the invasion.

Jin asks that he and Konami flee when there is a dangerous foe. When Karasuma asks why, Jin responds that Osamu and Chika would find themselves in a predicament somewhere during the invasion. He further explains that he will neither be there, nor be able to help. In fact, he was going to be defeated. However, Jin explained that there were people he was going to save, and that he would preferably survive.

Back in the present, Karasuma declares that he would stop Hairien within the 3 minutes that he had. Hairein notes that Karasuma was too fast for Alektor's bullets to catch up. He also notes that it was similar to Aftokrator's Trigger technology. Yoneya attacks him with rocks, since his Trigger only affects Trion-based objects. Karasuma uses the opportunity to attempt to slash Hairein, only for his sword to break. Mira then appears in a portal, which Hairein steps into with his fish. Karasuma prepares to go after him, only to be hit by Hairein's fish in the back. Yoneya realizes that this was because Mira had opened two other portals; one behind Karasuma, and one in their ship, allowing Hairein to send his fish through. Karasuma Bails Out, and Hairein appears before Osamu and Replica, the latter explaining Karasuma's situation to the former.

The Bailed Out Karasuma asks Usami to send the Alektor's information to Osamu, while Jin notes that the future shifted again. 435 seconds remained until the crossroads where Osamu's fate would be determined. 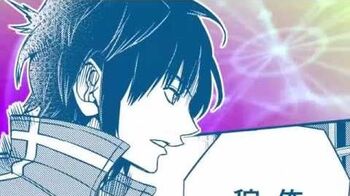