Kizaki is quickly outmatched by Viza, who activates his trigger Organon, one of Aftokrator's natural treasures. Hyuse and Viza then go after the C-Rank trainees, but are interrupted by Jin and Yūma.

After he manages to cut Kizaki in half, Viza says goodbye and comments that Kizaki should not be ashamed for his defeat as nobody managed to survive Organon's attacks. Kizaki then recalls his conversation with Jin.

"At a Ramen Shop, Jin mentions to Kizaki that they should be careful as they will be facing tough opponents during the invasion. Kizaki notes that they should avoid them; Jin agrees and asks Kizaki to let the others escape should they encounter a humanoid Neighbor. He adds that after the others have escaped, Kizaki needs to buy them as much time as possible."

Kizaki changes to Blade mode and activates his Thruster. He manages to land a hit at Viza's knee before he bails out. This surprises Viza and comments on his mistake. Hyuse then activates Lampyris and propels both of them away.

At Tamakoma, Yōtarō scolds Kizaki on his loss. However, Kizaki brushes it off and asks Usami whether she manages to collect any data. As Kizaki wonders, if he manages to buy the others enough time, Yōtarō asks why didn't he use all of his Trigger. Kizaki brushes it off again and says that he will analyze the enemy's Trigger. Unsatisfied, Yōtarō asks Kizaki again, but Usami asks him to stop and remarks that Kizaki is obligated to restrict his power. Yōtarō then notes that Kizaki would not have lost if he did. Kizaki calms him down by saying that Tamakoma has not lost yet.

Meanwhile, Osamu tries to open the door to HQ, but unable to do so. Karasuma contacts Usami for information. Usami notes that she is unable to contact HQ as something has happened in the control room or something was damaged when the Ilgars attacked.

Suddenly, Chika senses two enemies approaching fast towards their location. This surprises Karasuma and asks Osamu about it. Osamu replies that Chika has the ability to detects approaching enemies. As Viza and Hyuse arrive, Usami informs that the old man has a Black Trigger. Karasuma tells Osamu to fall back with the C-Rank and rendezvous with Jin.

As Viza and Hyuse about to attack, Jin arrives by crashing into a nearby building. While Jin introduces himself, Yūma rushes from above and kicks Viza to the ground. 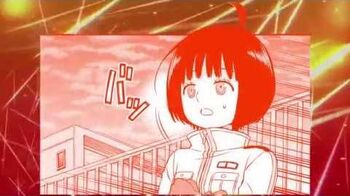