Yūma begins fighting Viza. He manages to use his Trigger to trap Viza, but is ultimately unable to overpower the Neighbor's trigger. meanwhile, Jin fights with Hyuse and it has been a stalemate.

Yūma kicks Viza to the ground, and Jin advises Karasuma to go directly to the base, as the passageways weren't working. Osamu shields Chika from an attack from Hyuse, resulting in him getting magnetic shards in his arm.

Viza gets tired of running around so as he activates Organon, Yūma uses his Trigger to chain Viza, Hyuse then decides to after the C-ranks but Jin quickly puts a stop to it by using Escudo. Viza gets slightly annoyed amd then uses Organon to cut the chain and tells Hyuse that they should do a different plan, similar Jin tells Yūma that they should split them up as Reiji says they are a powerful duo. Viza asks Hyuse if they should split them up or stay together but Hyuse says either is fine as he already layed out the groundwork for the 2nd best plan. Yūma says he will take on Viza as he already placed a seal on him and he doesn't understands Hyuse's magnets to which Jin understands.

Yūma then uses Boost Double to destroy the ground, Yūma then uses Chain to throw Viza into the air and uses Bound Double to go after him, Viza knowing that he doesn't have to hold back in the air, activates Organon but the blades are covered with Bolt, Yūma then attacks him with Anchor + Bolt Quadra to pin him to the ground. Yūma asks him why Aftokrator was invading Earth, and Viza replies that they were attacking other Neighbor nations with similar amounts of manpower. Viza is able to use his cloak to disable the heavy bullets on his body which confuses Replica. Yūma then asks Viza why they are going to so many nations and Viza asks if he answers it, will he turn a blind eye to the invasion but Yūma says there is no chance. Meanwhile, Jin continues his battle with Hyuse, with neither side being able to overpower the other. 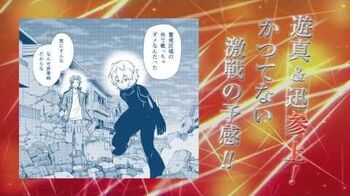