The battle with Suwa Unit and Enedra rages on; neither side being able to harm the other. However, Border's operators can analyze Enedra's Trigger. Meanwhile, Yūma continues to fight Viza. He manages to dismember Yūma's arm, separating Replica, who was merged into it, from Yūma. Yūma realizes Viza is just a decoy, while several Rabbits attack Osamu and the others.

The Battle between Enedra and Suwa Unit continues. Enedra, thinking of it as a game, violently impales Suwa with his spikes, only for his trion body to reform, Suwa simply complimenting Enedra's attack. Enedra then starts wondering how is that possible, quickly discarding the possibilities of immortality and illusion, and then attributing it to the place where they're fighting. He then tries to destroy the room, realizing it isn't affected by the attacks, "disproving" his theory. Simultaneously, Mikami is attempting to analyze the Black Trigger being used. Shinoda earns Kido's permission to join the fight against Enedra.

Meanwhile, Hairein is discussing about Yūma's Trigger with Mira and Lamvanein. He decides to end the situation as quickly as possible, as the Border agents were starting to become more difficult to fight.

Yūma continues his fight against Viza. Replica advises Yūma not to use Anchor, since it takes a large amount of Trion. Yūma uses Chain, and then Bolt + Boost to attack Viza, only for Viza to dismember his left arm, thus severing his connection with Replica. Yūma suddenly epiphanies that Viza was just a decoy, and the real assault was heading for Osamu and Chika, and the others with them, and tells Replica to go help them. Replica leaves a clone of himself with Yūma, before leaving.

In the end, Rabbits begin to pour out of gates where Osamu and the others are, Karasuma telling Osamu to wait. 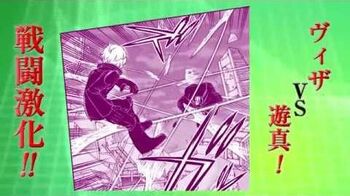