Osamu continues to flee from the Rabbits as Replica uses its self-generated one to fight them. Meanwhile, Suwa Squad continues to fight Enedra. Enedra manages to attack Suwa from within, but Tsutsumi manages to locate his weakness. Shinoda arrives at the scene, intending to take Enedra on.

Meanwhile, Suwa Squad continues to fight Enedra, with neither side being able to do sufficient damage to the other. Tsutsumi exclaims that he managed to find the source of Enedra's Trion. Suwa tells Enedra that they found his weakness, not knowing the information actually helped Enedra. Enedra attacks Suwa from the inside, as well as spread his smoke body to escape the confines of the room. He manages to cut off Suwa's arm without him being able to regenerate it, but Shinoda enters the battle, using Senkū as his initial attack, preparing to fight Enedra. About 960 seconds (16 minutes) remained until the crossroads where Osamu's fate would be determined. 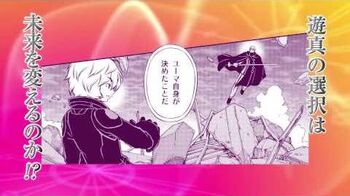