Mira kills Enedra and takes his Trigger. Meanwhile, Izumi continues to fight Hairein, and an unknown party manages to hit him.

The defeated Enedra is visited by Mira via her Trigger. Instead of taking him, she dismembers his arm ― which included his Trigger ― and takes the Trigger. She stated that she was ordered to retrieve the Black Trigger, not Enedra himself. Mira explains that he is too troublesome for them, and his personality and eye color was because of the influence his Trigger had exerted by taking root in his brain. She then uses her Trigger to impale his chest multiple times, killing him. Shinoda orders Kazama Unit (excluding Kazama himself) to analyze the body, stating that the horn had unknown Trigger technology.

Meanwhile, Jin continues his fight with Hyuse, who managed to break free of his Escudo. Jin informs the latter of Enedra's death, enraging him. Hyuse believes that it was just a taunt, and continues to attack him.

Finally, Izumi continues his fight with Hairein. Hairein uses insects for smaller attacks, which Izumi could not defend against. Izumi manages to deduce that Hairein could only affect Trion. He attempts to crush Hairein under a building, but to no avail. However, an unknown party manages to successfully hit Hairein. 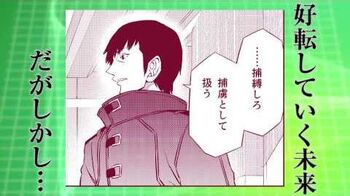