Izumi continues his battle with Hyrein, with the help from Snipers. However, Mira appears and summons Rabbits to distract them, while Hyrein forces Izumi to Bail Out. Karasuma then prepares to fight.

Yoneya, surprised by the destruction going about, asks what's happening. Someone then contacts him, apologizing him for keeping him waiting and saying they'd take on the humanoid neighbor. Far from there, Narasaka (the one who contacted him) and Kodera prepare to shoot Hyrein.

Izumi had destroyed the buildings for two reasons: attempting to crush Hyrein, and giving a larger field-of-view for Narasaka and Kodera, who managed to hit Hyrein. Hyrein, after realizing that, uses fishes in order to block the other attacks. Izumi figures out that Hyrein's Trion had its limit, and realizes that it was a contest of stamina. Tsukimi says Izumi's got Hyrein on his guard, and that the Snipers should target him.

Tōma, who is near, reports, saying hitting the main body through the fishes would be like a game. Kodera asks him not to play around, but Tōma tells him to just shut up, as he knew what he meant. Tsukimi says she doesn’t care as long as he hits the target, to which he complies. Tōma and Narasaka then simultaneously fire at Hyrein, both managing to shoot through the stark openings and hit Hyrein.

Meanwhile, Mira uses Speiraskia to appear in the sky, as well as summoning Rabbits to face Yoneya, Karasuma, Narasaka and Kodera, and Tōma, the latter who says it's unfair that they can move around freely, while Tsukimi warns them that a humanoid Neighbor must be near. However, Tōma alerts his captain, Fuyushima, and with his technology, he manages to warp the Snipers to safety. Narasaka then tries shooting Mira, but she uses Speiraskia to reflect the shot through portals back at him and Kodera, although they're able to dodge them in time. Fuyushima then tells them Kazama and Suwa units will soon arrive to help.

When Izumi thinks the battle with Hyrein is almost over, Hyrein then uses the cubes scattered around to heal himself, which Izumi calls unfair. Hyrein then orders his fishes to attack Izumi, who, cornered, has no option other than bail-out, disappointing Hyrein as he wanted to add Izumi to his army. Izumi contacts Karasuma, apologizing for not being able to defeat Hyrein, but Karasuma says it's alright. Karasuma then asks Shiori how long until Osamu reaches the base, and she says three minutes. Karasuma then activates Geist to fight the Rabbits. 590 seconds remained until the crossroads where Osamu's fate would be determined. 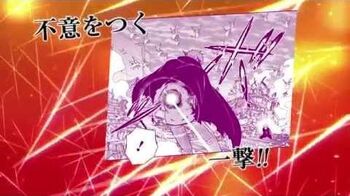