Osamu reverts to his normal body to counter the effects of Alektor and takes Chika's cube to the base.

Yūma leaves the defeated Viza to go assist Osamu. Hyrein and Mira are surprised to hear of the defeat of their most powerful combatant. Hyrein continues to battle Miwa, and Mira battles the Rabbit. As Osamu enacts his plan, Hyrein attack the Rabbit, putting it out of commission, and then Mira impales Osamu multiple times. However, Osamu deactivates his Trion body, since Alektor could only affect Trion-based objects. As Hairein plans to go after Osamu, he tries to do a sneak attack with Mira on Miwa. However, the latter knew about the duo's tactic and made it backfire by shooting into Mira's window. Mira proceeds to teleport Miwa away from the entrance. Yūma finds Osamu's location and shoots at Hairein, and Miwa deactivates his normal Trigger and activates Fūjin. 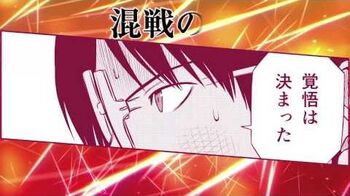