Yoneya and Izuho find Osamu in critical condition and tend to his injuries. Meanwhile, Konami finishes off the remaining Trion Warriors with the help of Arashiyama and Kako units. Jin concludes his battle with Hyuse, the latter having no choice but to give up, and the former reporting to Kido the Invasion's aftermath analytics.

Yoneya and Natsume tend to Osamu's wounds, soon to transport him to the medical facility within HQ, with Natsume confirming she had found Chika's cube. Meanwhile, Konami continues to kill the Trion Warriors attacking the citizens. She is unable to handle all of them by herself, but the Arashiyama Unit arrives, lending a hand. Kako Unit also shows up, albeit a little late. They plan to destroy the rest of the Trion Warriors.

Jin continues his battle with Hyuse, but is interrupted by Usami, who informs him of Osamu's condition, Chika's cube's arrival to the base, and the invaders' withdrawal, all while crying. Jin assures her that Osamu would live, then explains his actions to Hyuse, and suggesting he surrender for better treatment. He also theorizes that there was some kind of problem going on in Aftokrator.

On the Aftokrator ship, Mira, Hairein, Viza, and Lamvanein discuss their mission. While the mission was a failure, Viza regrets not being able to bring Hyuse back, although Hairein asserts Hyuse would become an enemy if they had rescued him. He deduces that someone foresaw the events in the invasion, planning everything. He goes on to mention that their original objective was met, aside from the matters of Enedra and Hyuse.

Back at Border, Tachikawa and Azuma both report missing trainees, likely kidnapped;Netsuki worries over backlash from parents and civilians. During a conversation between Jin and Kido, Jin confirms that the invasion is over, so it will be safe to send medical teams to the field. He also explains that the outcome of the invasion was the second or third best.

Characters in italics are seen only briefly, and have yet to make a proper appearance. 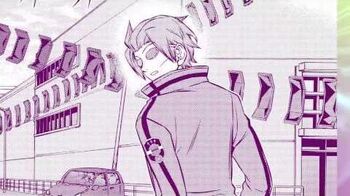