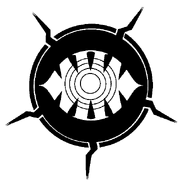 A Neighbor (, Neibā, lit. Near-world People?) is an interdimensional and extraterrestrial race of humans that live within the Neighborhood. While the inhabitants appear like regular humans, being from separate worlds makes them a completely unique species altogether. They were accused of attacking Mikado City four years prior to the start of the series, thus causing stigma towards them.

Some time before, Spinthir had invaded another nation, Calvaria. Yūgo and his son Yūma fought on the side of Calvaria, on behalf of Yūgo's friend Raymond. Three years after Yūgo's death, the war ended with Calvaria's victory.

An unknown nation sent Trion Soldiers to Mikado City, resulting in the city's near-annihilation if it weren't for Border, a mysterious organization that used Triggers, Neighbor technology to defeat them. Many people were killed or went missing. Border was set up as a protection agency.

The old god of Aftokrator, who powered the Queen Trigger of Aftokrator, was dying, and Aftokrator was in a crisis of looking for one. It was decided that the four major families would lead expeditions to find a god, but in case one could not be found, Hyrein planned to suggest House Ellin's head as god.