Edit
This page is about Chapter 84. For other uses, see Osamu Mikumo (disambiguation).

Karasawa takes Osamu, Yūma, Chika, and Kasumi to a press conference about the recent Aftokrator attack.

Karasawa takes Osamu, Yūma, Chika, and Kasumi to a press conference concerning the recent invasion done by Aftokrator. The media was inquiring about the deaths of 6 operators and the kidnapping of 32 C-Rank agents. In the room, Netsuki is bombarded with questions from the press. One reporter inquires about the deaths taking place inside the base itself.

Responding to this, Netsuki first gives his condolences to the families of the operators. He then begins talking about the kidnapped agents, stating that it was a shame. However, he concludes that it was not a huge loss. He argues that the current attack 8 times the First Large-Scale Invasion, 4 years earlier. 1200 people died, and 400 people were missing.

The current attack had 1/40th of the damage. Another reporter asks about the 40 victims themselves. One of the kidnapped trainees was the son of her acquaintance. She asks Netsuki whether what he said about the attack could be said to the parents of that trainee.

Commenting on the conference, Yūma notes that they were making Border look like the bad one. He adds that without Border, the casualties would have been much greater. Karasawa responds that both sides understood each other. Then, a reporter inquires about a trainee using a Trigger in the school, and how that possibly leaked information about C-Rank' lack of Bail Out. Because he knew Osamu would be displayed as a scapegoat, Karasawa brought him for a chance to fight back. Osamu decides to go and face the reporters head-on.

None appear over the course of this chapter. 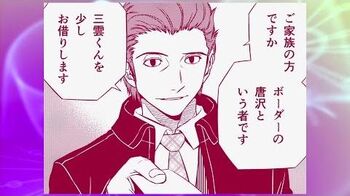