Edit
This page is about Chapter 69. For other uses, see Osamu Mikumo (disambiguation).

Osamu laments himself about attempting to fight Hyrein instead of fleeing, and Chika's subsequent transformation into a cube. Being inspired by Karasuma saying that there is something he must do, Osamu heads for the base, while fighting Rabbits on the way. Replica protects Osamu in the end, and summons its own Rabbit.

Chika transforms into a cube after being hit with Hyrein's attack, much to everyone's surprise. Osamu laments himself how Izumi ordered them to run, yet Osamu used Chika's Trion for an attack, only for her to be transformed. Hyrein is about to prepare another attack, when Izumi attacks him first, once more instructing Osamu to take Chika to the base. Karasuma tells Osamu that there's something he had to do, which reminds him of his promise to protect Chika, and decides to take her, no matter what. Using Thruster, he battles the Rabbit with Lampyris' abilities. He is able to severely damage it, but the Rabbit overpowers him. Replica shows up, on Yūma's orders, and protects Osamu. Using the information it analyzed from a previously scanned Rabbit, it summons a Tamakoma Rabbit, stating Jin's prediction was unraveling. 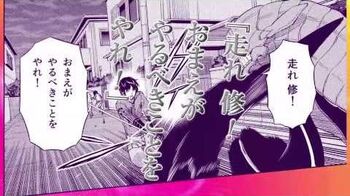