Edit
This page is about Chapter 82. For other uses, see Osamu Mikumo (disambiguation).

While internated in the hospital, Osamu flashes back to his pre-Border days and recalls Rinji's last days with him before he disappeared. Upon waking up, he finds his mother and Chika in his hospital room.

Karasawa returns to Mikado City from the meeting, and helps civilians rescue people trapped under the debris. Meanwhile, Osamu is unconscious in the ICU, while the others from Tamakoma Branch watch him. Yōtarō, crying, asks Osamu not to die, but Kizaki asserts him that Osamu would survive, according to Jin. Karasuma then asks Chika where Yūma is, and she explains that he was out looking for Replica with Jin. Reiji then informs them that the enemies' star is still near theirs, so they shouldn't lower their guard just yet.

During his unconsciousness, Osamu reminisces about the days he had with Rinji leading to his disappearance. Rinji managed to acquire a Trigger from an unknown party and shows it to Osamu. He explains that he and this unknown party will be examining what's beyond the Neighbor's gates. He explains that the gates were used by Neighbors to kidnap humans and return to where they came from. He also suggests it could be a portal to the Neighbors' ships, but ultimately, they were linked to somewhere. Osamu asks that if that place was destroyed, then Neighbors wouldn't attack. Rinji says that would be temporary if it happened at all.

When Osamu declares that he wanted to join him, Rinji denies, stating that it was too dangerous. However, he invites him to help with an examination on May 2. However, on that day authorities arrive at the Amatori's house. Chika visits Osamu and reveals that Rinji was missing, and it was her fault. Osamu notes that it was the first time he ever saw Chika cry. He reads a pre-recorded message Rinji sent stating that if he received that message, it meant he wouldn't return.

After that, Osamu decided to join Border as a field agent. However, the examiner recommends that Osamu becomes an Operator or Engineer due to his particularly low Trion level. Osamu, being unable to accept that, bluntly sneaks into the forbidden zone to negotiate with Border, despite knowing it's dangerous. A Bamster then appears from a gate and tries to attack Osamu, but he is saved by Jin, who kills the Bamster in one hit before it has a chance to reach Osamu.

Osamu then wakes up in the ICU, and finds his mother waiting outside, with Chika sleeping on her shoulder. 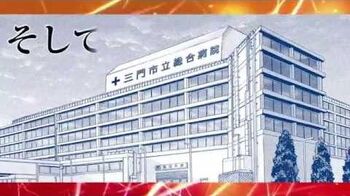