Osamu attempts to flee into the base, only to be impaled by Mira's Trigger. However, Miwa and the C-Rank agents attack Hyrein as he attempts to take Chika's cube. With Viza, the group retreats, leaving Hyuse behind.

Osamu continues to head to the base, as Hyrein chases him. However, Mira, with her remaining Trion, uses her Trigger to impale Osamu in the arm, leg, and stomach. Despite being heavily wounded, Osamu throws Replica into the invaders' ship, which was their plan as it would take 20 seconds to open the door to HQ but can hack the ship instantly.

As Hyrein realizes this, Yōsuke and the C-Rank members along with Yūma shoot at Hyrein, but all of these attacks are blocked by Alektor. However, Miwa uses Fūjin to attack Hyrein from the underground by surprise, and manages to heavily damage the Neighbor.

After being thrown into the ship, Replica activates the emergency launch. Mira goes back inside to try stopping it, and finds out that it cannot be reversed. Hyrein takes the cube Osamu was holding, only to find out that it was not Chika's, deducing that he hid it in the rubble. Not having enough time to search for it, he goes back inside the ship and the group retreats, after Viza also returns.

Hyrein decides they would abandon Hyuse as planned. Replica, who is on the ship, tells Osamu to take care of Yūma. The ship departs, and the invasion is finally over, while a severely wounded Osamu lies on the pool of his own blood, unconscious. 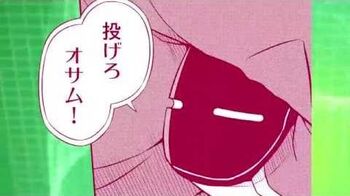