This article is about the chapter. For other uses, see Shūji Miwa (disambiguation).

Miwa decides to battle Hyrein on his own, using his shield as a counter to Hyrein's Alektor. Osamu and Replica run to the base, but are attacked by Mira, and have to run away from her. Meanwhile, Yūma is still battling Viza, who has the upper hand, but refuses to give up.

The chapter begins with Miwa dashing at Hairein, prepared to attack him, while Osamu and Replica watch from afar. Miwa shoots at Hairein, who tries to defend himself but the Lead Bullets bypass them, which surprised him. Hairein sends his fishes to attack Miwa, who is in mid-air. Miwa uses his shield as a counter, forming small hexagons with his shield to prevent the fishes from touching him.

The fishes transform part of Miwa's shield into cubes, which Hairein uses to heal himself. Miwa then attacks him with his Kogetsu, managing to cut his cloak and part of his hair. Osamu is impressed by this, and remembers a conversation he had with Karasuma, about the Lead Bullet. Miwa then manages to wound Hairein's shoulder, and Osamu decides to help.

Osamu forms Asteroid in his hand, but instead of the usual cubic shape, Osamu's trion takes a very irregular shape. Osamu thinks it's a Trion leak, but Replica says it looks like a trigger dysfunction, and Osamu wonders if it could have been due to Chika's trion.

Osamu then asks Replica to power his Trigger up using Boost Double, and tries to shoot it at Hairein, but he is protected by his fishes, which turn Osamu's bullets into cubes, annoying Miwa. Osamu and Replica then resume trying to get to the base, in the entrance of which is one of Mira's portals. From behind him, Mira tries to stab him with her Trigger, but Osamu realizes this and dodges in time, with her managing only to stab his leg, and he sees that she's the one creating the portals.

Meanwhile, Yūma and Viza are still battling, Yūma being in a disadvantage. Yūma and Replica's clone realize Viza has a portal near his ear.

Yūma then has a flashback with his father, and decides to keep on fighting, quoting Osamu. 199 seconds remained until the crossroads where Osamu's fate would be determined. 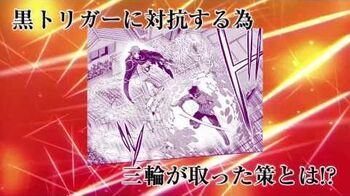