Viza (ヴィザ, Viza?) is a Neighbor from Aftokrator and a Black Trigger user. 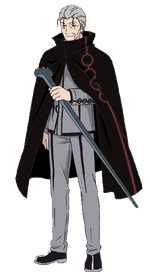 Viza's appearance is that of a calm, easygoing, elderly man. He has medium greying hair slicked back. He is always with his eyes closed, or squinting. He is also frequently smiling, in addition to no horns, unlike the other members of Aftokrator.

Viza seems to be a gentle person, even to those who are considered his enemies. He has a gentlemanly air to him. He says he dislikes the idea of "kidnapping children" and hurting "young ladies".[3] However, his actions imply that he has a darker side than he usually shows, and his alleged reluctance does not seem to affect his fulfillment of his assigned duties at all.

Perhaps due to his age and experience he remains calm and perceptive during battles,as evidenced when he was quickly able to realize Reiji's combat tactics were for a drawn out battle with the intention of keeping them occupied. Despite him being a skilled combatant and a black trigger user he is not arrogant and is even willing to praise his opponents for their skills and traits as seen with Yuma and Reiji respectively. He is willing to acknowledge both opponents and colleagues, treating them with respect and politeness.

His personality is in contrast to his colleague Enedra, who is disrespectful and rude to both friends and foes alike, unwilling to acknowledge others. He also seems to have a fondness for battles, enjoying it even if he isn't the victor, as after losing against Yuma, he was visibly excited about his defeat.[4]

Viza seems to like Hyuse a lot, as he felt bad for leaving Hyuse behind.[5]

Viza has taught Hyuse the sword arts when he was younger

He seems to respect Yuma,or at the very least acknowledge Yuma's ability.