Arashiyama Squad comes to assist Jin against the top teams, while Yūma and the others are still training.

At Tamakoma, Yūma exits the Training Room and once again looks frazzled, but won three rounds against Konami. Yūma then asks for a match to Karasuma, whom he calls senpai which irritates Konami. Outside, Reiji and Yōtarō take Osamu and Chika for a run, in order to improve his ability to use his Trion body.

Meanwhile, Jin and Tōma exchange friendly pleasantries, but are cut off by Kazama. Jin asks the group to leave Tamakoma's new recruits alone. In return, Tachikawa says that it's impossible, which leaves Jin having to fight. But Kazama reminds Jin that it is against Border's rules for agents to fight one another. Jin turns this back at him, stating that Yūma is also a Border agent now, so their mission is also against the rules. This infuriates Miwa, but Tachikawa counters by saying that Yūma cannot be considered a fully-authorized Border agent until the recruitment date in a couple of weeks. Until then, he is simply a Neighbor. At this point, Miwa realizes that the reason he doesn't like Tachikawa is because of his similarity to Jin. Kazama tells Jin that Kido will do anything to obtain Yūma's Black Trigger, and they will eventually succeed. Jin replies that it isn't just a Black Trigger, but more important to Yūma than life itself. Seeing Jin's determination, Kazama reminds him that he's facing Border's top teams that were chosen to be part of Expedition Force. Jin also admits that at best, even his Black Trigger would be an even match against their strength, that is, if he is alone. 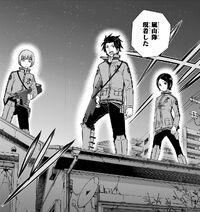 Just then, Arashiyama Squad shows up, under orders from Shinoda to assist Tamakoma Branch. Arashiyama says he owes Osamu, and Jin says that with Arashiyama Unit on his side, even his Side Effect says they will win. Tachikawa draws his Trigger and decides he wants to prove Jin's Side Effect wrong.

Characters in order of appearance[]