Commander Kido accepts Yūma as an official Border agent in exchange for Jin's Black Trigger. Yūma chooses Scorpion as his Trigger, while Osamu decides to be a Gunner instead of an Attacker.

At HQ, Tachikawa asks Jin why he handed over Fūjin despite him winning the fight, and he demands Jin to get it back. Kazama says that Jin wouldn't have to fight them if he had done so earlier. Jin says that, given its value, it wouldn't be enough to hand over Fūjin and he only managed to do it due to Tachikawa and Kazama. This irritates Kazama as he feels that he's been used by Jin in order to raise Fūjin's value. Tachikawa then asks on Jin's plan for having a Neighbor enlist in Border, even going as far as handing over his Black Trigger. However, Jin dodges this by saying that he didn't tell Kido about this either.

(Flashback)
Kido questioned Jin's reasons for a seemingly unbalanced trade in their favor, but Jin simply replied that he didn't want Border interfering with Yūma's battles. He added that, according to his Side Effect, they would someday be helpful toward Kido's goal.
(Flashback ends)

Jin says to Tachikawa and Kazama that he wants Yūma to have fun, because fighting with Tachikawa and the others was the most fun he had. Hearing that Yūma is such a skilled fighter, Tachikawa says he is now interested in meeting him. Kazama wonders about Jin letting go of a keepsake from his mentor, but Jin said that he wouldn't be angry. Finally, Jin says that he will join the ranking tournaments since he is no longer S-Rank which excites Tachikawa.

Jin returns to Tamakoma and asks Yūma if he has gotten used to Border's Triggers yet. Yūma replies that Usami has taught him a lot of things and plans to surpass Konami. Jin then inquires about Osamu's training with Karasuma and when Usami says that he's keeping Karasuma busy, Jin says it should be fine, since Karasuma is good at teaching. After eating all the snacks, Jin retires to his room and flops down on his bed. As Jin stares up at the ceiling, he remembers Kazama's words about Fūjin being Mogami's memento. He closes his eyes and says it will be alright, since the future started moving forward.

Days later, Yūma informs Konami that he'll be using Scorpion as his Trigger. Meanwhile, Osamu decides to be a Gunner which surprises Karasuma as Gunners use a lot more Trion than others. In the training room, Reiji praises Chika's practice and obedience. As days passed, they finally reach Border Member Official Enlistment Day.

Characters in order of appearance[] 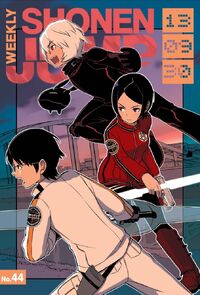