The Trigger Holder takes the form of a black-colored ring with a thin white line running through the center, meeting to form two small circles parallel to each other. When activated, this Trigger summons a black-colored jumpsuit-like armor with thin red lines running through it, covering most of the user's body with the exception of their head.

When Yūma still lived in the Neighborhood, he and his father, Yūgo, participated in ongoing wars. During one of the battles, Yūgo told Yūma not to participate this time, because earlier that day they had found the dead bodies of some of their allies' most powerful men. Raymond suspected it was the result of the other side having a Black Trigger. Yūma, however, pouted and didn't think much of his father's words. After his father had left to go fight, Yūma left their side's fortress and went outside into the battlefield. Seeing multiple battles he could help win, he decided to make stealth attack to eliminate some of the enemy units. But during his exploring, he ran into an unknown enemy, and wasn't strong enough to defend himself, resulting in his near-death. Yūgo, finding Yūma's wrecked body, created a Black Trigger: a ring. He then sealed the body of the dying Yūma inside the trigger, substituting it with a body made of trion (with which his hair is white); thus saving Yūma. However, this took all of Yūgo's power, and so he turned to dust, crumbled, and died. Replica theorizes Yūma's body (although sealed) is still degrading, and Yūma will eventually die. 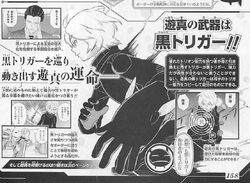 The power Yūma's Black Trigger is such that, coupled with Yūma's exceptional fighting skills, it allowed him to incapacitate two A-rank Border agents[4] while attempting to neutralize them peacefully,[5] and even to defeat the mighty Organon user Viza granted he used a one time trick.[6] Its primary asset in combat is an arsenal of versatile seals that create different effects, which can be also amplified or combined and disappear after one activation. It also bestowed on Yūma his father's paranormal capacity to detect lies.[7] The black garment it creates seems to offer some degree of protection since Yūma took no damage from Chano's Asteroid.[8] However, the armor can be easily penetrated by stronger attacks, such as the bullet of an Egret[9] and Organon's blades.[10][11] Unlike most other trion bodies, it does not grant Yūma a communication device, a function that is thus taken over by Replica.[12]

Aside from the seals, Yūma's Black Trigger has a series of abilities that are unique even among Black Triggers. Most remarkable is the one associated with the purpose of its creation, the permanent substitution of Yūma's fatally wounded flesh and blood body with one made out of trion in order to slow his death to a near halt,[13] meaning some functions of the Trigger are always active. The trion body itself has three main peculiarities. The first is its ability to repair itself almost instantly when damaged,[14] which no other trion body possesses;[15] however, this comes at the expense of its durability,[15] as a car crash is enough to crack it.[14] A second distinctive feature is that Yūma's trion regenerates itself, despite him being always in a trion body. Lastly, this special trion body allows Yūma to activate other Triggers normally, causing it to be swapped with an ordinary combat body generated by the Trigger Holder in use.[16]

As a side effect, Yūma no longer needs to sleep and has greatly enhanced physical abilities even outside of his combat trion body. This uniqueness has proven to be an instrumental asset in battle that allowed Yūma to surprise and beat Viza.[6] Viza's defeat was made possible by another singular ability of Yūma's Black Trigger, which is the capacity to use its seals even without activating it properly and creating a combat body.[17] The same applies to multiplier[18][19] and compound seals.[20] They can be used even when Yūma is in a trion body created by another Trigger.[21]

Yet another singular characteristic of Yūma's Black Trigger is that its seals can also be used independently by Replica,[22][23] a Trion Soldier, as well as its small avatars.[24][25] Replica is also capable of fusing with Yūma's combat body.[26] Indeed, Yūma's Black Trigger peculiarly relies on Replica to bring out its full potential: in fact, it is the Trion Soldier who is generally in charge of creating multiplier and compound seals,[27] which it can do also through its small avatars, although this way the process will take longer.[27] A similar drawback applies if Yūma sets the seals on his own.[28] Furthermore, although Yūma himself can add new seals by analyzing other Triggers, he is unable to do so on the spot,[29] and thus relies on Replica's help.[26] These seals exceed in power the Triggers from which they are derived.[30] This is linked to the Black Trigger's final ability: the capacity to accrue seals so that, once memorized, they can be accessed during future activations of the Trigger.[31] As a consequence, the scope of its abilities can widen over time if the user has access to other Triggers.[32] The exact conditions that must be met for them to be copied are currently unknown, although two are certainly exposure to the Trigger in question and the proximity as well as the length of time required by Replica or Yūma to analyze it.[26]

The only known users of this Trigger are Yūma Kuga and Replica (seemingly through Yūma). The former is dependent on it to live, and if separated from it, he will lose his trion supply and eventually run out of it, falling into a sort of "sleep mode" unless he can find another supply. Furthermore, without his ring, he will be unable to send nutrients to his flesh and blood body, which could lead to his demise.[75] Similarly, Replica receives its trion from the ring.[76] Trion Soldiers generated through the Gate seal can also use some of its abilities.