Edit
This article is about Chapter 83. For other uses, see Yūma Kuga (disambiguation).

Osamu speaks with his mother, who talks to him about what happened while he was out. Shiori visits him to talk about promotion, and Yūma later visits him to discuss Replica's fate. They are then visited by Karasawa, who wants to talk to Osamu.

Osamu's mother asks Osamu if he and Chika weren't in an intimate relationship, since she didn't cry for him, which makes Osamu feel awkward. She also explains that many people visited him, including Rindō, Yōtarō, Arashiyama, Kitora, Natsume, Kazama, Midorikawa, Izumi and Yoneya. Chika wakes up, happy that Osamu is alright, and tells him that Yūma hadn't paid him a visit yet.

Usami, dazed and sleep-deprived, comes to tell Osamu about the promotions given to agents who fought to defend the city: categorized as special, primary, and secondary. The special achievers — who included Miwa, Tachikawa, Amō, and Yūma — were awarded 1.5 million yen and 1500 points. The primary achievers — Osamu, Azuma, Izumi, Midorikawa, Yoneya, Kazama Squad, Jin, Konami, and Arashiyama Squad — were awarded 800 thousand yen and 800 points. The secondary achievers — Karasuma and Kizaki, Tōma, Narasaka, Kodera, Suwa Squad, and Suzunari First — were awarded 300 thousand yen and 350 points.

As Usami leaves, she goes back inside to tell Osamu that Yūma was there. Yūma discusses Replica with Osamu. He explains that Replica could not be dead; otherwise, his small clones would have disappeared. He affirms that if they ever went to Aftokrator, they would retrieve Replica. Osamu weeps for not being able to save Replica, blaming himself. Yūma, putting the blame on himself instead, tells him not to, as he had sent Replica to protect Osamu and Chika. They return to Osamu's hospital room, where Karasawa has been waiting for them; he asks Osamu for a stroll.

According to the original text, Osamu was out for no more than one week. 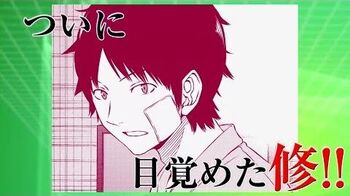