Edit
This article is about Chapter 78. For other uses, see Yūma Kuga (disambiguation).

With Replica bisected, Osamu's chances to get to the HQ with Chika's cube seem lower, but Replica can still open the door. Replica sends his Rabbit to battle Mira, but Hairein and Miwa's battle moves to where they are and Hairein aids Mira. Meanwhile, despite all difficulties, Yūma is able to defeat Viza by a pinch even after having his combat body destroyed.

The chapter begins with the bisected Replica falling apart, surprising Osamu. Replica's Rabbit then attacks Mira, who easily dodges, while Osamu recovers one of Replica's parts and starts running again. Hairein and Miwa then crash through a building nearby, and Hairein sends birds to help Mira, melting one of the Rabbit's hands.

Replica then removes the magnetic shards from Osamu's arm, and Osamu asks if he's ok. Replica explains he has switched to the spare systems and most of his functions were stopped, but he still can open the entrance of the base.

Meanwhile, Yūma is still battling Viza. Viza uses Organon's blade rings to attack Yūma. Yūma dodges them, but his left arm gets cut. He notes he can't get closer to Viza and Replica's clone says Viza is adjusting to his moves. Replica says that they should retreat and try to catch him unaware, but Yūma says that probably won't work and decides to attack Viza head-on. 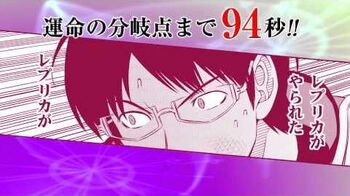